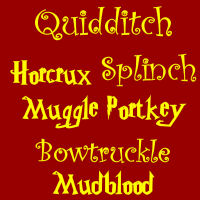 and character naming in canon and in fanfiction

I want to share this interesting article from the OxfordWords blog about JKR’s use of language in Harry Potter. The author, Adam Pulford, discusses everything from Rowling’s use of “real” mythological beasts and creating her own, to her use of Latin for spells, to the creation of new terms using familiar English words (e.g., “Mudblood”), to the way she evokes a medieval and obscure world through use of words that are — or sound as if they should be — from an older variety of English.

One thing that I found particularly amusing and very true was a remark the author made regarding the different kinds of names Rowling chose for her characters. Pulford says:

Minerva McGonagall’s first name draws on mythology, and lends that character a certain amount of grandeur – would anyone at Hogwarts have taken Mandy McGonagall seriously?
— Adam Pulford, OxfordWords Blog, 13 July 2011

I couldn’t help but think of some of the original character names that we encounter in some fanfiction which sound out-of-place in the Hogwarts/Harry Potter universe; they’re neither of the sort of esoteric names of some of the canon magic-born characters  (e.g., Lucius, Sirius, Severus, Druella, etc.), nor the down-to-earth “ordinary” British names of some of the more down-to-earth characters (think of the Weasleys, for example: Arthur, Molly, Bill, Charlie, Fred, etc.), nor the “old-fashioned” but quite ordinary English names (Hesper, Horace, Irma, and so on).  Instead, the names are reminiscent of pop-star offspring, or possibly soap opera characters. When I run across one of those names displayed prominently in a fanfic summary, I am fairly certain we’ll find a Mary Sue behind the name. (I would give some made-up examples of that sort of name, but I don’t want to inadvertently choose examples that someone has actually used, and have them feel that I’m dissing their fic.) Such names often reference celestial objects, gemstones, and flowers, usually in combination. These days, Mary Sues are rarely content with a name as common as “Mary,” and often possess more than one given name, which is mentioned far more frequently than Dumbledore’s many names — Albus Percival Wulfric Brian.

Other writers sometimes ask me how to avoid writing a Mary Sue, or how to recognize a Mary Sue in their own writing. They’re often afraid to write an original character because of the fear that, on seeing there’s an OC in a fic, their potential audience will scoff at a “Mary Sue” even before having read a word of the story. Everyone who reads my fanfic knows I don’t shy away from original characters who are necessary to the story and who are integral to it, having natural relationships with other characters in the fic and, if they’re prominent, having a personality rather than just attributes. But a character who consists only of superhero attributes and who exists only to rescue all of the canon characters or to show them up is almost always a “Mary Sue,” a two-dimensional character who is unrecognizable as a “real” person.

What keeps canon Harry Potter or canon Albus Dumbledore from falling into “Mary Sue-ness”? For surely, these two characters are remarkable and possess greater powers and have better luck than the other characters in the story — extraordinarily, Harry even has a prophecy about him.

Yet Dumbledore and Harry, in addition to possessing superhero attibutes, also have personalities, friendships, relationships with others that are often complex; they’re not always right in how they behave, but their behaviors spring from who they are and where they’ve come from. And unlike the Mary Sues whose authors try to rescue from that label by adding a few obvious faults or weaknesses, Dumbledore’s and Harry’s failings or missteps are qualities integral to their personas rather than features tacked on to the characters  after their creation.

But back to Pulford’s point about JKR’s way of naming her characters. There’d be nothing wrong with a character named “Mandy McGonagall,” but as Pulford points out, we take Minerva seriously in part because she has a formidable-sounding name. We would expect a Mandy McGonagall to be a bit more like a Lavender Brown or a Katie Bell — wholesome but generally ordinary.

Not that a witch or wizard in the HP universe has to have a “powerful” name to be a “powerful” character — “Harry,” for example, is a pretty ordinary name. But when Tom Riddle reinvents himself, he gives himself a new name, one that is esoteric and evokes fear and dread, rather than keeping his ordinary name, “Tom.”

So the names that Rowling gives her characters shape our expectations of them, and then the characters either emerge larger than their names or in keeping with them — or, as in Harry’s case, perhaps display that it is not blood, class, or status that determines a person’s worth, but ordinary decent values acted upon and lived, even when the choice between “what is right and what is easy” can be a painful one for the ordinary person faced with such a choice.

Anyway, enough of my blather! Here’s the article — enjoy!

Still interested in the HP vocabulary? Check out Potterwords!

10 responses to “Harry Potter and the Linguistic Innovator | OxfordWords blog”

What do you think? Cancel reply